RENSSELAER – When folks woke up Monday morning at the Renwyck Apartments, the first thing they had to do was pack up their belongings and leave.

According to Rensselaer Mayor Mike Stammel, a malfunctioning sprinkler system in the six story high rise sent water cascading from the third floor.

Stammel says soaked ceiling panels fells to the floor. While most of the water is in the hallway, some has backed up into apartments. 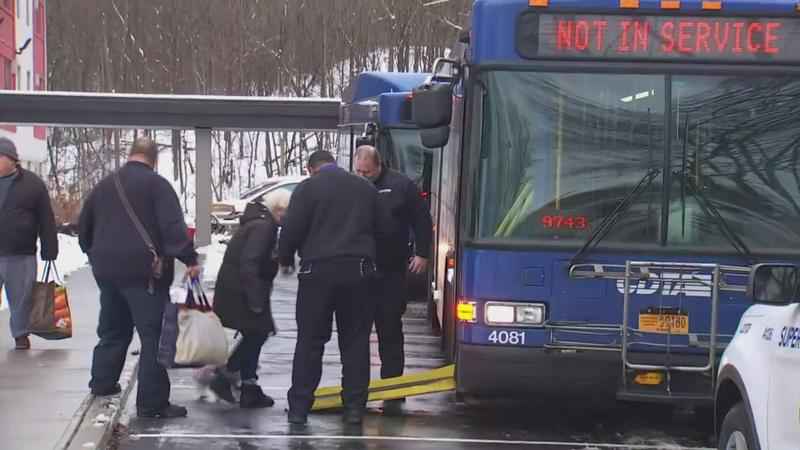 Beyond any cosmetic damage, the water shorted-out electrical power throughout the building, leaving apartments without heat, and a high-rise full of seniors without a working alarm system.

CDTA buses were brought in to provide warmth for the residents, and for those without family or friends to stay with, to transport them to area hotels.

The marketing and communications director for the facility sent the following statement:

"A coalition of partners, led by the City of Rensselaer, promptly and proactively evacuated residents from Renwyck Place today in response to water in the mechanical room that may affect the building’s mechanical and electrical systems. The malfunction of a sprinkler head caused the issue. The team did a great job in leading a safe and orderly evacuation of residents to a nearby hotel, where they will receive meals and accommodations, or to the homes of friends or family members. We expect the evacuation to last about 24 hours while technicians assess the damage, make any necessary repairs, and ensure the systems are working properly. Given the colder temperatures, the emergency response team, in collaboration with the property management team, determined this was the best course of action.

Moving forward, the plan is to continue to closely monitor the mechanical and electrical systems in each building and work with our partners to prioritize the safety of residents. While it is difficult to predict when an event such as a power outage or a freezing temperature may have an adverse effect on the building’s systems, we are prepared to respond appropriately when they do, especially with the swift and comprehensive support from the City of Rensselaer, Rensselaer County and non-profits such as the American Red Cross.

Additionally, there are 93 occupied units in the building. The sprinkler head malfunction caused some flooding in portions of several floors (not the entire floor). The team is conducting additional unit inspections to determine the scope of work."

Hear from a young boy who was visiting his grandma when all of this happened, and also from the mayor on why he says he thinks this whole ordeal could have easily been prevented, by watching the video of Dan Levy’s story.