JOHNSTOWN – Video from law enforcement shows a truck engulfed in flames after a crash on Route 122 in the town of Johnstown Thursday afternoon.

Dave Bertos was driving when he saw the crash, and stopped to help moments after the crash.

"The car was already in flames, so I tried using my elbow and my fist to break the window, which doesn’t work, I don’t recommend it," he said. "And that’s when the other gentleman pulled up in his car."

The other driver was Aaron Kiffney, who was driving home from work.

"We were trying to break the window. It wouldn’t break. We went to the other side. Somebody said the fire was starting on the inside, so it was like, we’ve got to hurry up, so we pulled the door down," he said.

"It was definitely on fire," said Bertos. "The floorboards already had flames coming up out of them when we broke the driver’s side window, so it was a pretty dire situation."

"He moaned when we were dragging him," said Kiffney. "He moaned, so I figured that was a good sign, but his head looked terrible."

Joanna Muhlberger lives nearby. She is a nurse. She heard the crash and ran to the scene to work on the man’s injuries. 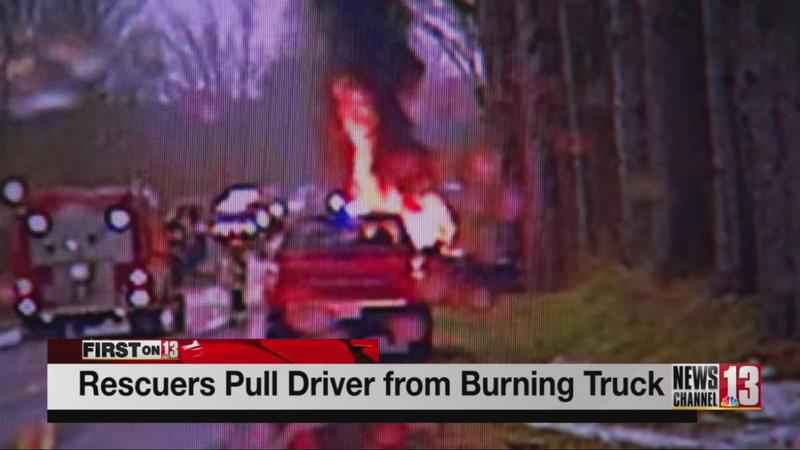 Officials say thanks to the rescuers, 36-year-old Anthony Zambella is on the road to recovery.

"They’ve done one surgery, multiple broken bones and things of that nature," said Fulton County Sheriff Richard Giardino. "Many of us at the scene didn’t think he was going to make it, so it’s truly a miracle, with help by the hands of these people and the nurse. Everyone together made a difference."

"I think that’s amazing. I think it’s reassuring to know that there are people in our community who are willing to put their own lives at risk to save somebody else’s," he said.

"I commend the Gloversville officers for coming out of the city to help us and I commend the three people who pulled him out of the vehicle and rendered aid until somebody else got there," said Fulton County Sheriff’s Deputy Kerri Hauser, who also responded to the scene. "If they hadn’t, he probably wouldn’t be here today."

The rescuers don’t think of themselves as heroes, and said they just did what had to be done to help someone else.

However, the sheriff says they saved a life. He will be honoring them at a ceremony next Friday morning.