Russell Sage College is rallying behind one of its own as she battles breast cancer.

"I woke up in the middle of the night at the end of February and felt pain," said Ann King.

As fate would have it, Ann King’s mammogram was only a week or so away, but with inflamed lymph nodes believed to be the result of a recent COVID-19 vaccine shot, Ann had to be her own advocate. She had to listen to what her body was telling her.

"The pain started to be more prominent and something was there," said King.

A little more than a month after the Sage College Sports Information Director received her breast cancer diagnosis on May 13. Ann underwent the first of eight rounds of chemotherapy to attack the disease. 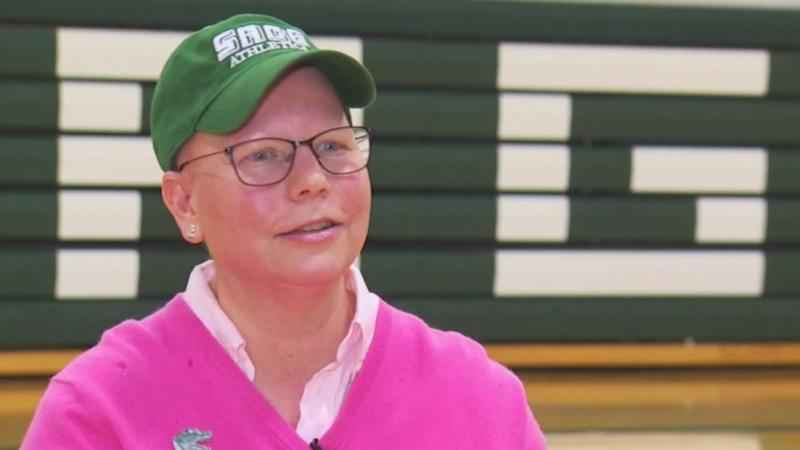 And still, very few on campus at Sage College knew about Ann’s battle.

"I was like, ‘Wow, this woman is so incredibly strong, and she’s still out here supporting us,’" said Hallie, a soccer player for Sage’s women’s team.

Still out there doing the seemingly endless job of an S.I.D.

"She’s a fighter. She never quits. Whatever comes her way, she’s going to battle head on," said Garrett Cobb, the women’s soccer coach, who lost both of his parents to cancer.

With Ann on their hearts and minds, as well as the family of a teammate from last year, Kallan Schertzer and the women’s soccer team launched the inaugural Gater-Aid game.

"It touched a very soft spot in my heart," said Schertzer.

Concealing her battle hasn’t been possible lately, with signs of Ann’s treatment are apparent.

"Everywhere I went, my hair was coming out. It was pretty dramatic when it was suddenly gone. Here we are….two and a half, three months later," said King.

Ann has completed her eight rounds of chemo, but she knows she’s far from the finish line, and even farther from seeing all life has in store for her as a mother.

"I want to see my son graduate. I want to see him get married and be a grandma and all of those things," said King.

And as if any more motivation was needed, Ann says her son has promised to shave his head once she beats breast cancer.