It is opening day at the Saratoga Race Course, and fans are excited to be back for the first time in two years.

The “running of the fans” took off at 7 a.m. as everyone raced through the gates trying to get a coveted picnic table for opening day. Some fans had been lined up to get in since Wednesday night.

?? ICYMI: Here are the eager fans racing through the gates at 7 a.m. for #OpeningDay at the #SaratogaRaceCourse. The first fan in line told @emilydevito he arrived at 9:30 last night! #track13 pic.twitter.com/zzmWuwNCkn

John Murray and his buddies were first in line at the gate along Union Avenue.

“Usually 12:30 is our normal,” Murray said. “Today, with COVID last year, we thought it’d be a little crazy. So one of our buddies mentioned hey let’s get there at 9:30 and the idea kind of stuck. So we did it.”

Here is a look at the people who have lined up outside the gates at the Saratoga Race Course! I just spoke with one guy who said he got here at midnight. To say people are excited is an understatement @TheNYRA @WNYT #Track13 pic.twitter.com/m8wC6hL6e3

He says they wanted to get the perfect spot

“It’s right centrally located right next to a walkway by the bathroom by the betting window,” he said.

For many, waiting in line and coming to the track on opening day is a tradition — one they missed last year.

Now that they’re in the fans are setting up their spots for the day! @WNYT #track13 pic.twitter.com/Q9FdVoFdNH

“The energy here is just unbelievable,” Nolan Isabella said. “This is like one of the funnest times I’ve had waiting for tables in a long time.” 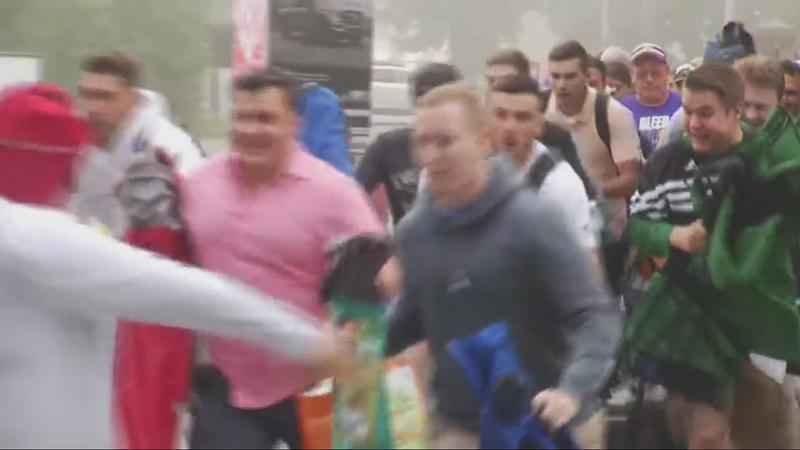 “Everyone had a tough year,” Morgan O’Brian said. “We never thought we’d be back here, not wearing a mask and pretending like it’s a normal year. So it’s been awesome.”

While fans were settling in, the horses were warming up on the track in the fog.

The horses ?? have made their way to the track and are warming up! Looks absolutely beautiful with the sun coming up and fog lifting #track13 @WNYT pic.twitter.com/sR0DsVQwSy

Many fans are hoping to get lucky in today’s races. The experts have some advice whether you’re betting at the window or home.

“Go with your gut,” advised Tony Allevato NYRA Bets. “With All the homework you do, whether you’re a novice or first time player, there was a story once, a woman who bet her phone number and won $200,000.”

Win or lose, most people are just happy to be back.

“It’s the summer place to be,” Murray said. “It’s about family and friends hanging out, the atmosphere, the comradery. It’s just, there’s nothing like it.”