There are allegations of criminal activity surrounding the upcoming elections in Saratoga Springs. Democrats are accusing Republicans of forging signatures on the petitions needed to get on the ballot.

Dillon Moran, the Democrat running for Commissioner of Accounts, held a news conference on Tuesday to show what he says is clear evidence of forgery.

Moran showed several examples of signatures that appear to differ greatly from those on file with the Board of Elections. 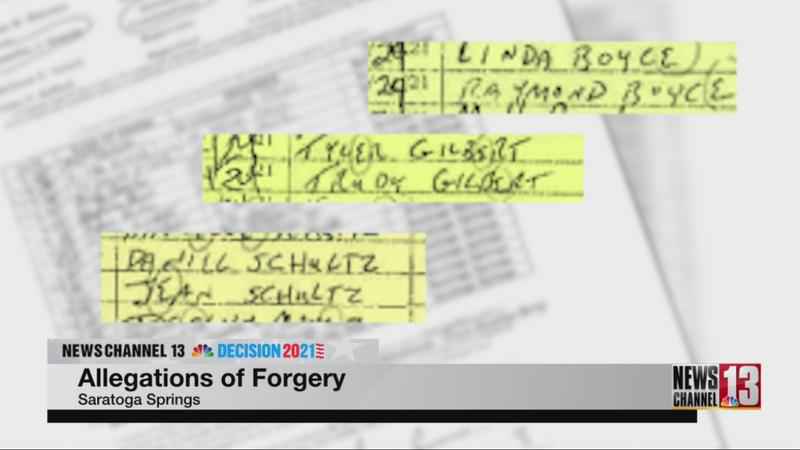 Moran says three Saratogians sent a letter to the District Attorney on June 10, asking her to look into what they call criminal activity.

Albert Ormsby is one of them.

"I’m outraged by the fact that they don’t follow the rules,” said Ormsby. “Anyone who takes a look at those hand-printed signatures, it’s clearly a fraud," he said.

Guerra wasn’t available for an interview, but sent this statement:

"…I’ve been in situations before of being wrongfully accused as a domestic violence survivor. I’ve learned…you have to stand up for the truth and for what’s right. And the truth is on our side."

Moran says Chris Obstarczyk, the Republican Committee Chair, who is an attorney, should know better.

"Mr. Obstarczyk headed this up, facilitated it, and did so in complete contradiction to his ethical and professional requirements of his job," said Moran.

"Mr. Moran’s wrong and politically-motivated misogynistic attacks against Samantha…demonstrate how desperate he is to revive an uninspiring and failing campaign…We have the legal documents that prove there isn’t legal fraud."

NewsChannel 13 will keep you posted.