It’s easy to watch the news coming out of Ukraine and feel powerless to help. But a local man says his family’s connection to Poland is driving him to go to the front lines.

Adam Israel decided watching the war from the comfort of his home in Saratoga Springs was not enough. He’s no stranger to Eastern Europe or to disaster zones. He says he thrives in chaos—adapting quickly to help people.

He had no choice but to adapt in 2017, when hurricanes destroyed his family’s home in the U.S. Virgin Islands. He, his wife Kasia and two young children had been living there and running a hotel and restaurant.

“My wife and kids got out on the proverbial last plane out… There were like dogs and goats and chickens on the plane, everything that could get out, but the islands were devastated,” Israel recalled.

He stayed behind, helping distribute boxes of donations and letters from around the world through an organization called Adopt a Family. His restaurant became a staging area for boxes of clothing and essential items, with his efforts featured on national news. 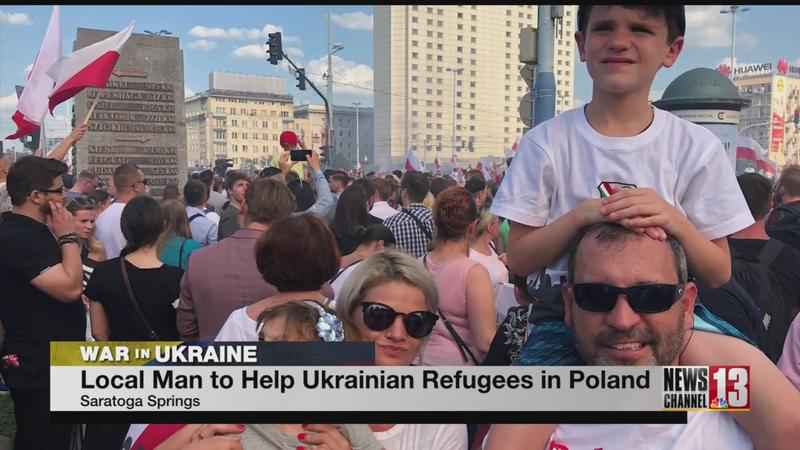 Now, he finds himself close to another disaster.

“You know, I have this connection to Poland, I’ve done this before with these boxes, so what can we do, what’s the relationship?” he said, explaining how he started to think about helping on the ground.

During the pandemic, his family bought a home, a car and a pub in his wife’s native Augustow in eastern Poland, now flooded with Ukrainian refugees.

“Where I think I can be the most useful right now is helping get these Ukrainian families to identified spots around Poland where they have housing, they have jobs, they have meals waiting for them,” he said. “We still have a car there, we have a family SUV there, and I thought, boy, I could go there and with our car, I monitor a lot of social media activity about what’s needed there, and logistics, moving people and supplies around.”

This Sunday, Israel plans to fly there and do anything he can to help people in need of a ride and safety.

“My goal is to start with aid agencies in Warsaw, make my way to the border, but not become traffic,” he said. “I speak enough Polish to at least get around, we have enough friends there, we have enough family there, where it’s not going to be a burden on the country.”

Israel said his family’s pub has signed up as a business willing to hire refugees and is donating a portion of its proceeds to help them.

He hopes to bring a suitcase full of cards with any cash people can spare. Israel knows one of the greatest comforts in chaos can be a message of hope.

“Maybe just a letter, with some kind words, some inspirational words. We’re just praying for you, we’re hoping for you, we hope these things help. And you just see that connection, knowing that the world is thinking about you,” he explained.

Members of the public can help by donating a card (and a few dollars if they can) at a rally for Ukraine this Thursday from 5:00 p.m. to 7:00 p.m. on the corner of Lake and Broadway in Saratoga, or drop them off at the Inn at Saratoga until Sunday at noon.

You can also visit the Facebook page Israel just created, Letters of Hope for Ukraine.