That afternoon, sirens started blaring and people had to evacuate. It wouldn’t stop raining. With soaked clothes on, people loaded on to buses and were rushed out of the village.

"We need to go to Cobleskill," one resident told NewsChannel 13 that day.

"They want us to leave our pets. It’s not fair she’s four pounds," another person said.

All of Main Street was filled with several feet of water. When the waters receded mud was left, and pieces of people’s lives in piles on the sidewalks. 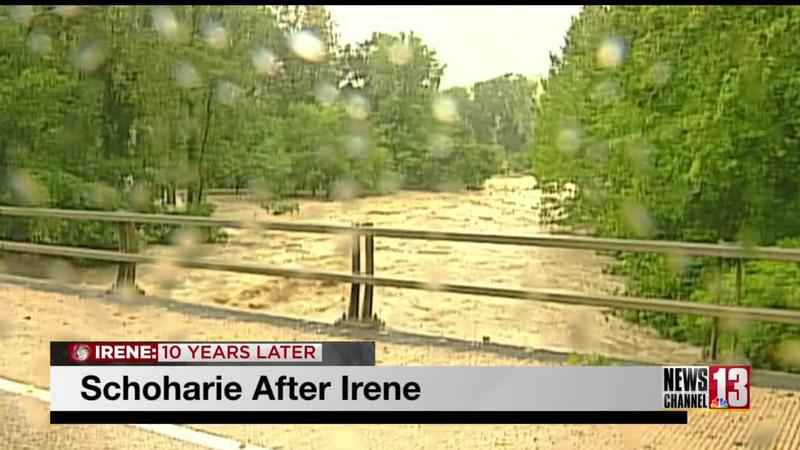 "Every place was caked with mud, cornstalks, garbage of all kind. Stuff washed into things, stuff washed out of things," said Sarah Goodrich with Schoharie Area Long Term. "The looks of despair on the business owners, most of whom were dealing with not only their business, but also their homes."

Seventy five percent of homes were destroyed in Schoharie, 100 percent of businesses.

Leslie Price is the Schoharie Village Clerk. NewsChannel 13 spoke with her 10 years ago after the flood. She helped organize 60 FEMA projects in the village.

"When someone says we’ll be back together in six to eight months, when I hear these new events in different states, I pray for them because they have no idea. It doesn’t happen that quickly," Price said.

The Parrot House, was once the center-piece of the village. New owners are in the process of fixing it up with hopes that it will once again be a thriving inn, restaurant, and bar. It’s a project 10 years in the making.

Volunteers came from every corner of the region, and Sarah Goodrich helped them figure out where to go to help. She helped launch SALT, Schoharie Area Long Term, to help this area come back. A decade later, SALT still exists.

"Still very much, 10 years later, a whole decade later, alive and well. We evolved into an all volunteer organization again. We started that way, and we are that way now," Goodrich said. "Recovery is still ongoing, which to me is very exciting. After 10 years the impetus is still there, the energy still there, and we’re still moving forward."

To hear more, click on the video report above.