School superintendents ask for changes to ‘Test to Stay’ program

MECHANICVILLE — "Test to Stay" is a new program being implemented in many school districts.

In a letter, 55 school superintendents urge the New York State Health Department to update guidance for "Test to Stay" to allow students to take part in extracurricular activities.

"We can’t minimize the value that all the extracurriculars bring to the kids’ entire school experience, whether it be an athletic event or chess club," said Mechanicville School Superintendent Bruce Potter.

55 school superintendents from around the region are calling on NYS to change Test to Stay to allow students to take part in extracurricular activities. Hear from Mechanicville Superintendent Bruce Potter tonight on Channel 13 @WNYT pic.twitter.com/9WvAjZMM3A

In the past, students who had close contact with a COVID case in school would have to go out on quarantine.

Under "Test to Stay," students with no symptoms can stay in school with a series of rapid tests in the days following exposure. 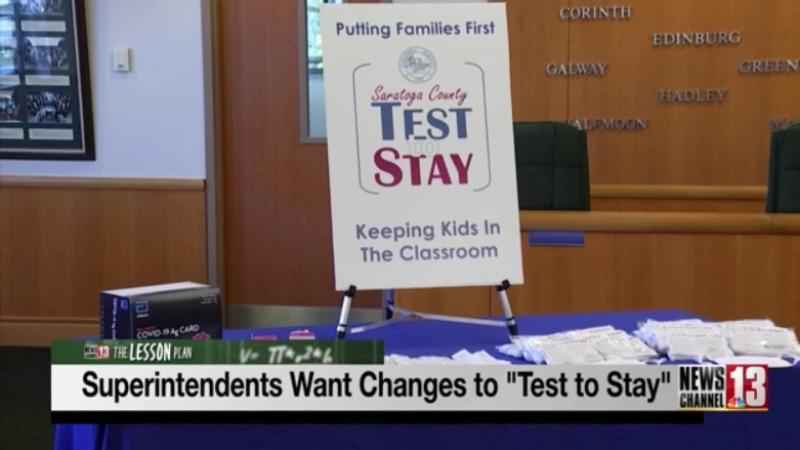 South Glens Falls was the first in the state to do Test to Stay, and found it saved students 2,000 days of in-person learning over a period of two months. Out of the more than 500 students being tested, three came back positive for the virus.

Mechanicville has been doing test to stay since last week.

Superintendent Bruce Potter calls it a gamechanger, and says including extracurriculars makes sense.

"When we have rules that go out, and they’re conflicting, then we lose public confidence. The parents need to be our partners, and if we send mixed messaging, it damages that partnership."

Potter also said Washington-Saratoga-Warren-Hamilton-Essex BOCES and the Saratoga County Department of Health have been invaluable partners.