ALBANY – Three of the top scientists in the country were in Albany on Wednesday to be honored for their work to advance COVID vaccines. The three were awarded the Albany Prize, the most distinguished prize in medicine.

Albany Medical Center gives the prize every year to people whose work led to advances in medicine.

This year, they’re all pioneers who helped get vaccines from the lab into arms — Dr. Barney Graham, who headed up the Vaccine Research Center at the National Institutes of Health, Dr. Katalin Kariko, and Dr. Drew Weissman, who led the effort to put messenger RNA to work in COVID vaccines.

Kariko told NewsChannel 13 her inspiring story of how she got to where she is today. She was born and raised in Hungary — the daughter of a butcher. She helped make sausages. Now she’s making vaccines and being recognized with the Albany Prize for her pioneering work as a scientist. 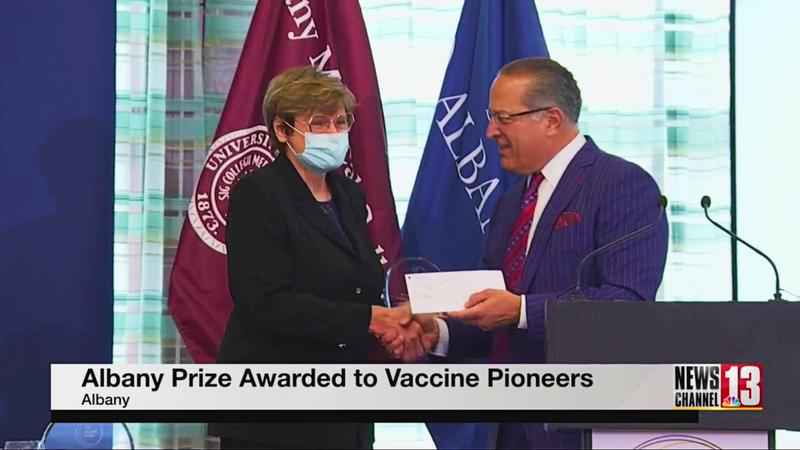 However, it’s the time in between the sausages and her groundbreaking work getting mRNA to carry genetic instructions for the COVID vaccines that makes her story so fascinating.

Kariko moved to this country in 1985 with her husband and their 2-year-old daughter. The Hungarian government said they could only bring $100.

"We had no credit card, no cellphone," recalled Kariko.

Always the innovator, they sold their car and sewed the proceeds, £900, into their daughter’s teddy bear.

"If they found out that we were smuggling £900, then we were not allowed to leave," said Kariko.

Kariko says they survived on a strict $30 a week for groceries. When the research called for it, she would sometimes sleep under her lab bench.

Learn about her strict work ethic, and how she passed it down to her daughter who achieved Olympic glory, by watching the video of Mark Mulholland’s story.