SARATOGA SPRINGS – Gaffney’s Bar & Restaurant in Saratoga Springs has been ordered shut down by City Hall for now.

The shutdown was ordered after two checks bounced. One was for the fire inspection, and the other was for the bar’s eating, drinking and cabaret license. The checks totaled $435, Saratoga Springs Public Safety Commissioner Jim Montagnino confirmed.

It’s not clear when the bar can reopen.

"I’m told they sent someone to the Accounts Department this afternoon to make good on the payment. But I understand that accounts can’t approve their permit without their correcting another problem having to do with a lack of licenses on the part of some of the bouncers," Montagnino told NewsChannel 13 Monday evening.

NewsChannel 13 has been reporting on recent concerns of violence surrounding the bar and restaurant that are separate from the stabbing. Monday, NewsChannel 13 confirmed the bar is facing charges from the State Liquor Authority, five of which will be discussed at a hearing Thursday. The five charges were filed last year, before a string of incidents at the bar that have taken place since New Year’s Eve. 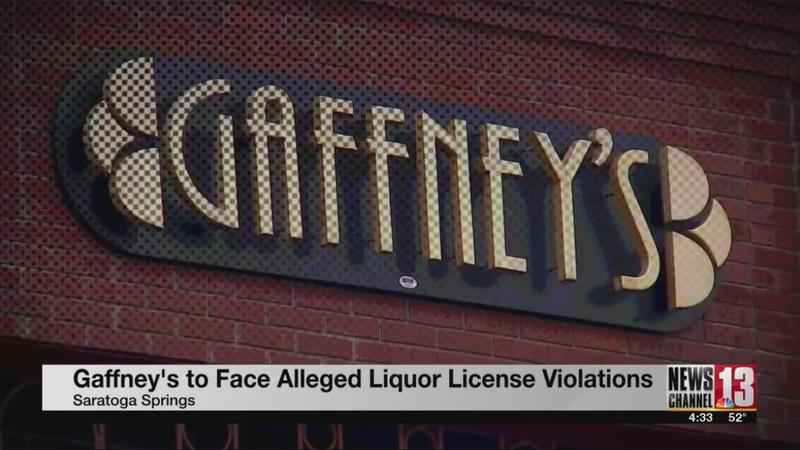 The bar has pleaded not guilty to all of the violations, eight of which will be addressed at a future hearing.

The State Liquor Authority says a judge at the hearing will decide if the charges should be dropped or advance to the full board for disciplinary action. The board has the power to fine Gaffney’s or take away its liquor license.

In addition to already pending liquor license issues, Montagnino tells NewsChannel 13 police responded early Sunday morning to a stabbing at Gaffney’s. The victim was taken to Albany Med with non-life threatening injuries. Montagnino says the stabbing is related to a fight that spilled outside the bar, during which a police officer suffered a minor injury.

The commissioner also says three people have been charged with disorderly conduct in the fight, but no one has been charged for the stabbing.

As NewsChannel 13 has reported, other bars and restaurants in the area of Gaffney’s have complained about the violence. However, Gaffney’s has said it is the target of a so-called hit job by the police department, and that they have 10 times more customers than other bars, and they don’t have more problems.

NewsChannel 13 tried to reach out to Gaffney’s Monday, but could not get in touch with an owner.