TROY – If you’ve driven on busy Pawling Avenue in Troy, you might have noticed a billboard congratulating Bill Fortin for 60 years as a barber.

"Knocked me over," Fortin said. "My wife surprised me. Unbelievable."

Fortin has always had a beagle with him in the barbershop. His current companion is Louceil, named for his parents, Lou and Ceil.

Bill’s business is Town and Country Barber on Pawling Avenue in Troy. 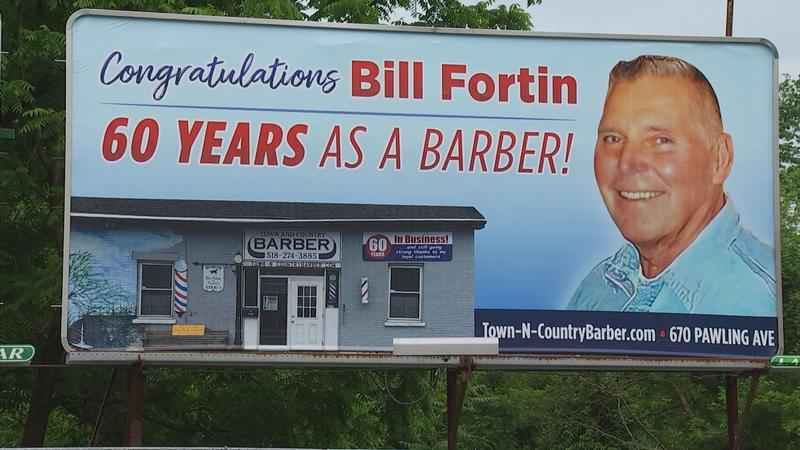 People like to confide in barbers; he’s the keeper of secrets.

He takes walk-ins. During the pandemic, he tried scheduling the day.

"Guys don’t show up for appointments," he said. "They forget to have appointments. They’ll come in late and then the next guy is mad and all that takes on. I tried it for two weeks. No, thank you."

He got his first shop on Walker Avenue, thanks to a client, a bank president who wrote a check for $5,000.

"He gave it to me. He said give these people this, and it’ll be your building. I said how do I pay you back? He said you pay me back when you start making money. And within six months I was making great money. And I had it paid off in a couple years. It was nice. Nobody does that anymore."

In between customers, he likes to put his feet up, the dog by his side, on the zero gravity chair.

His retirement hours, as he calls them, are Tuesday through Friday, noon to 6.

He says it doesn’t feel as if he’s been a barber for 60 years, but he’s not going to stop now.