TROY – Jamie Groff was driving to work early July 12, when she noticed flames on the second floor of a house on 10th Street in Troy, and called 911.

She watched police officers kick in the door, run in, and get John Connor, Jr. out of his first floor bedroom through the thick smoke.

Connor’s nephew, Tim Ruffinen, got a chance to thank some of them in person: Officers Tom Bass, Richard Romero, Evan Cioffi, and Jeremy Rossetti.

"I thought that they were courageous and brave," said Ruffinen. "What they did was selfless."

Ruffinen also wrote a letter to the mayor and police leaders, recognizing the officers. 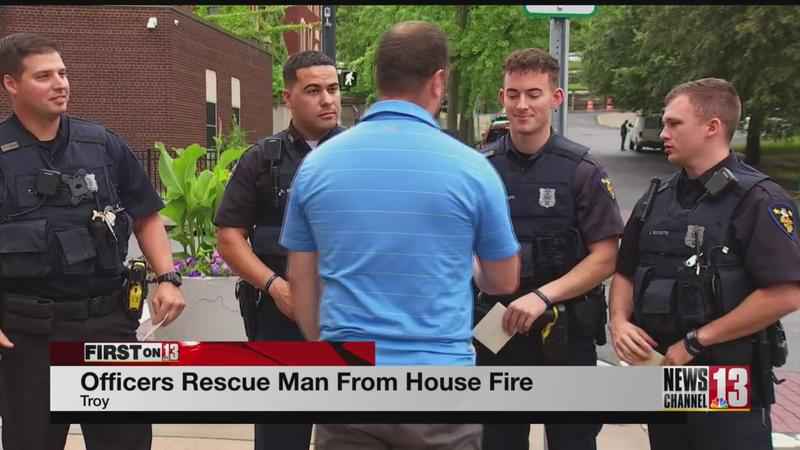 They say they’re just happy everybody was okay.

"I think that it’s just part of our job," said Officer Rossetti. "I know anyone else here would have done the same exact thing that we did."

"Because the officers, they really don’t get the recognition that they deserve," she explained. "A lot of the time, it’s a lot of negativity towards you guys. And you guys really did go above and beyond."


The house has been in the family for generations. It was destroyed by fire, but there was no loss of life, and for that, Ruffinen’s family has immense gratitude.

"We’re one of the last owner-occupied buildings on that street. And usually when you’re in a neighborhood that has owner-occupied, you feel a sense of community," said Ruffinen. "So for individuals that called 911 and the officers, just kind of speaks to that there still is a community around there and that people look out for one another, even in a tough neighborhood like that. And we’re very thankful for that, and we’re very thankful for individuals that stepped forward to help people that they didn’t even really know."