TROY – Hostage negotiators are speaking out after diffusing a volatile situation at Stewart’s at Vandenburgh Avenue and Campbell Avenue Thursday night.

Two Stewart’s employees were held hostage inside the store for about one hour until the hostage negotiators from Troy Police were able to talk down a mentally disturbed man.

This all began around 11 p.m. Thursday. When police arrived, several cars in the parking lot had been smashed into, and glass in the storefront window had been smashed, after a car slammed through it. 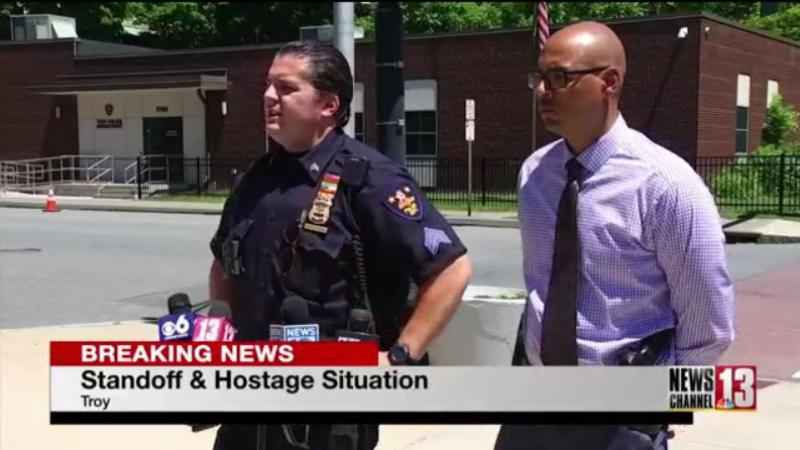 Inside the building, two Stewart’s employees were being held hostage by a man with a pair of scissors.

Troy police went inside. Sergeant Nick Laviano and Patrolman William Fitch – both of whom have had training in hostage situations – spoke with the man, gained his trust, and convicted him to free the hostages after about an hour.

There were tense moments, there were moments of uncertainty. In the end, the situation was diffused without injuries.

BREAKING NEWS – the Stewart’s Shop on Vandenburgh Avenue in Troy has reopened after repairs. Last night, a man drove through the storefront window and proceeded to hold two employees hostage at knifepoint. TPD hostage negotiators TALKED THE MAN DOWN. No injuries. pic.twitter.com/PWAFZF1tWR

The suspect was removed from the scene and transported to a local hospital for evaluation. No charges have been filed yet, but that may change.

Police say this Stewart’s was apparently chosen at random, and the suspect’s actions appear to be the result of a mental health crisis.

Everyone is singing the praises of Troy police for a job well done.

The hostage negotiators say this was the first time they’ve had to use their skills outside of training.

Gary Dake, Stewart’s Shops President, released a statement on Twitter:
"A heartfelt thank you to the @TroyNYPolice for their excellent, professional response to last night’s events. While devastating, there were no injuries. Thank you for taking good care of our @StewartsShops Partners when they needed you!"

Learn about what that experience was like by watching the video of Dan Levy’s story.