ASHLAND – A woman is dead after a dump truck crashed into a Greene County home.

The crash caused a fire that destroyed that home, a barn and the home next to it.

As NewsChannel 13 first reported Wednesday evening, It happened on Route 23 in Ashland, across from West Settlement Road.

Police say witnesses tried to rescue McGill, but she died at the scene. 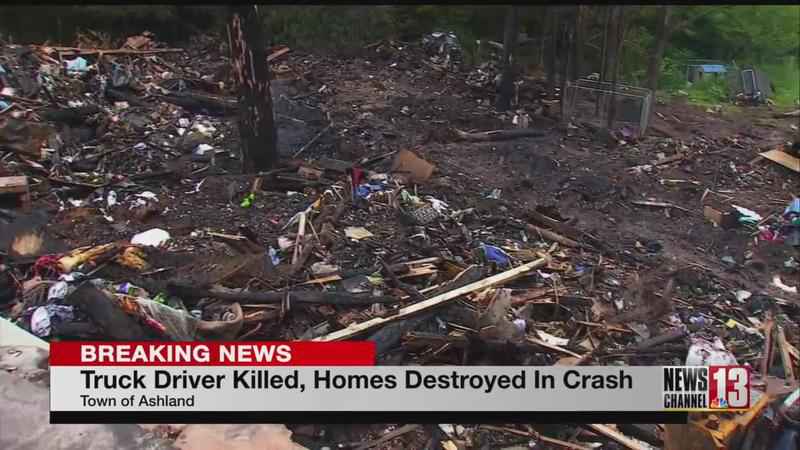 The truck was carrying asphalt used to pave the road where the crash happened.

One firefighter was treated at Albany Medical Center for smoke inhalation.

The two homes that went up in flames belonged to one extended family, and several members of the family lost everything.

Family at the scene told NewsChannel 13 they lost three dogs and numerous sugar gliders in the fire.

They say family members were at work and out of the house, but could have easily been home as the fire ripped through.

"Definitely, God was looking out for the family at that time," she said, looking out over the wreckage.

Post grew up in one of the homes. She married the boy next door, and is raising a family there. Her brother started his married life in one of the homes now destroyed. All three homes and a barn stood side by side before Wednesday.

Her parents’ home belonged to their family for generations.

"It’s tough to have to walk through here and see where your bedroom used to be in, the backyard where you used to hang out and play hide and go seek," she said.

Only Post’s home was spared as firefighters battled flames for hours. Pieces of her childhood are left behind.

"My dad had a huge baseball card collection, way back when I was a kid, like years and years, baseball collection, and I’m finding a card here, and a card there," Post said.

The fire was hot and intense, melting the siding on a home directly across the street.

Her teenaged son can’t get the sound of the crash out of his mind, thinking of the driver who died.

"It’s a long road for everybody, just making sure we’re there for each other and taking care of each other," she said.

Post says they likely can’t rebuild here because of building codes, which have changed in the years since the homes went up. The barn was 100 years old.

However, she’s putting the news into perspective.

"It’s kind of, you have to think about what you lost, but somebody else lost a lot worse," she said.

A GoFundMe page is helping Post’s sister-in-law and brother, who lost everything. Click here to donate.

This rubble has pieces of one family’s memories– all that’s left after a fire ripped thru their 2 neighboring homes in Ashland, Greene Co. Wednesday. Still waiting for details from police on the truck crash that led to fire. @WNYT pic.twitter.com/G84ciI2YXH