CLIFTON PARK – "Stephanie, Cayleigh, would you like to join us at the USA Games in Orlando?" asked Stacey Hengsterman, president and CEO of Special Olympics New York.

Those are the words 13-year-old Cayleigh Moorhead and 21-year-old Stephanie Hamelink have been dreaming of hearing.

The Capital Region gymnasts will compete at the USA Games in Disney World next summer and represent Special Olympics New York. Stephanie competed in the USA Games once before, and for Cayleigh, it will be her first time. Both are looking forward to showing their stuff in some of their favorite events.

Stephanie explained some events she typically competes in. "Bar, beam, floor, and vault," she said.

For Cayleigh, she likes to "go to the bar, and do a backflip over at the bar." 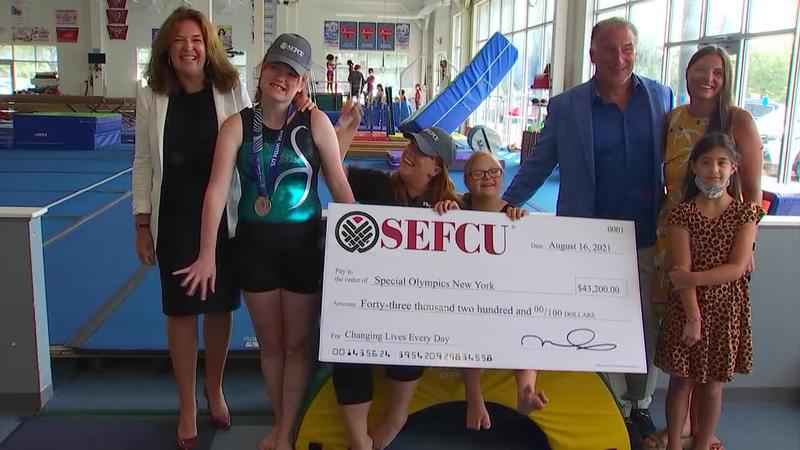 Coach Marlene Michels also got a surprise. She will get to join Stephanie and Cayleigh at the happiest place on earth.

"Now that I get to go, I can’t even begin to tell you how excited I am. I am blessed," she exclaimed.

They are getting the chance to go thanks to SEFCU. The credit union matched every medal that Team USA won during the Tokyo Olympics. In doing so, the company raised more than $43,000 for Special Olympics New York.

"My eyes teared up, as would anybody’s. To change their lives on the spot simply by donating money, that simple act of changing their lives and allowing them to go to Orlando and compete is just fantastic," said Michael Castellana, president and CEO of SEFCU.

The president and CEO of Special Olympics New York says she couldn’t be more grateful for athletes like Stephanie and Cayleigh to get this experience.

"For our Special Olympics athletes this is their chance they can really compete in an authentic sport, make new friends, and go for the gold," said Hengsterman.