WATERVLIET – Firefighters in Watervliet dealt with intense heat along with flames as they battled a fire Monday at 24th Street and Broadway that ultimately left least 19 people homeless.

The call came in around 1:15 p.m. When crews arrived, they found three homes fully engulfed.

Ariel Ramos is a neighbor. He was driving by when he saw the smoke and heard a woman across the street yell to get the residents out. He quickly ran to the back of the burning building and started banging on the back door and yelling for the resident to leave the home. When the resident refused, saying he has two dogs in the home, Ramos ran into the home with the resident and got the resident and the dogs out to safety.

He says fire crews arrived at the scene shortly after. Flames were billowing from the homes, and heavy smoke broke through the roof before it completely collapsed.

Two firefighters went to the hospital for heat exhaustion. One resident was also taken to the hospital. It’s believed they were being treated for smoke inhalation.

Fire Chief Tom Garrett says a face shield actually melted off one of the emergency workers. 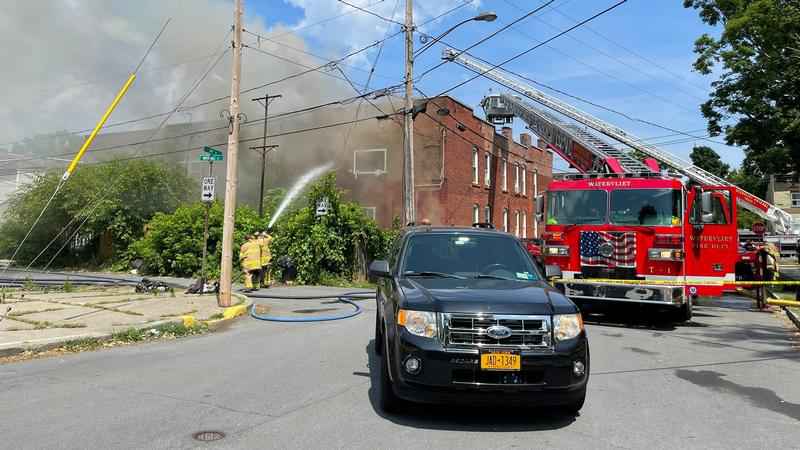 Crews respond to a fire in Watervliet.[Kevin Montano / WNYT]

Power had to be shut off in the area while firefighters battled the flames — leaving many without air conditioning or electric fans on a very hot day. The Watervliet Housing Community Center located was opened for any residents in the area without power.

With firefighters from three area departments battling the blaze, all Terry Johnson could do was sit there on a neighbor’s lawn chair and watch as the roof caved in on all of his belongings, and destroyed the place he’s called from for 15 years.

"I lost all my clothes and my computer equipment," Johnson said. "Both of my cars are damaged. My Range Rover, they wouldn’t let me move."

Howard Barrett, 64, is a veteran now forced to start his life all over again.

"I lost it all," Barrett stated. "I lost all my supplies. I lost all my meds. I couldn’t grab them. There just wasn’t enough time. It was just progressing that quickly."

At least 19 people are homeless because of the fire, including four children.

"It’s very, very sad, especially for the kids," said Jose Santiago, a volunteer for the American Red Cross. "You’ve got people that work all their lives, and a little bit that they have is gone in a couple of seconds."

"I don’t do depression," said Johnson, "Everything happens for a reason and God doesn’t make mistakes."

There is no word yet on a cause.