Who is New York’s 57th governor?

Gov. Kathy Hochul has had a lot of experience in politics. After Governor Cuomo announced his resignation, she stressed to New Yorkers she was ready for the state’s top job.

"The promise I make to all New Yorkers, right here, right now. I will fight like hell to help you every single day," Gov. Kathy Hochul said during a press conference after then Governor Andrew Cuomo announced his resignation.

Kathy Hochul has spent much of her life advocating for New Yorkers.

She was born in Buffalo, and says her parents’ humble start to their marriage living in a mobile home park, helped shape her.

"They always brought us back here to remember where we came from. That’s something that always makes me empathize with people. It’s part of who I am," Hochul told NewsChannel 13’s NBC affiliate WGRZ. 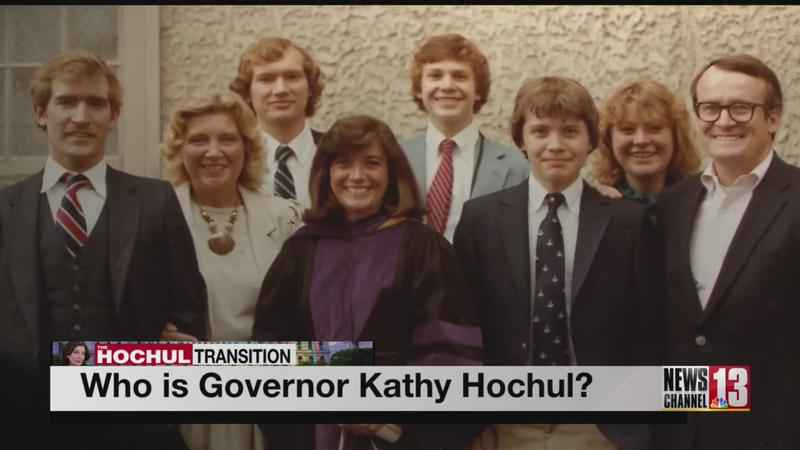 Hochul became politically active during her time in college at Syracuse University, where she led a boycott of the student bookstore over high prices.

She went onto receive a law degree from Catholic University of America in Washington D.C. She practiced law before entering public service.

In 1994, Hochul won a seat on the Hamburg Town Board and became the Erie County Clerk in 2007.

Hochul surprised many when she won the 2011 special election to represent New York’s republican leaning 26th Congressional District, which spans parts of Erie and Niagara Counties.

In 2014, she became the Democratic candidate for lieutenant governor, and was sworn in back in 2015, alongside then Governor Andrew Cuomo.

Now, with her new title as New York’s 57th governor, and the state’s first female governor, Hochul faces many challenges, including the pandemic. Already sharing her stance on issues like the need for a mask mandate in schools.

As she starts her first day in office, she wants New Yorkers to know one thing.

"I’ll do what I’ve always done. I will travel the state to meet New Yorkers to listen to them, to assure them that I’ve got their backs," Hochul said.