Embattled psychiatrist found to have questionable past 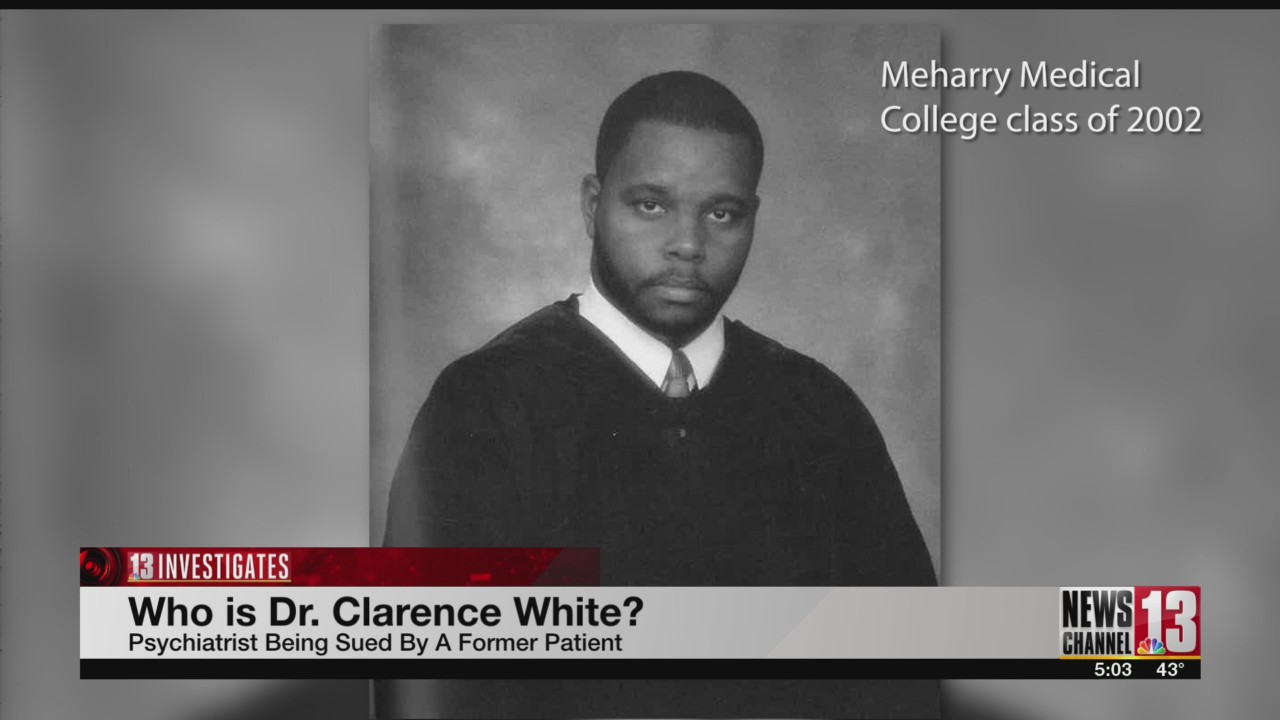 Who is Dr. Clarence White?

13 Investigates told you about a Capital Region woman left traumatized by the alleged verbal abuse by her former psychiatrist. We’re taking a deeper look at the doctor in question: Clarence White.

White graduated from Meharry Medical College in Nashville, Tennessee in 2002. His graduation photo is a 20-year-old photo that still makes Dawn McGrath shudder.

McGrath said in March 2018, White verbally assaulted and harassed her while she was a client at St. Peter’s Addiction Recovery Center.

“They allowed a monster into her life. He completely flipped her world upside down,” said Greg Teresi, McGrath’s attorney.

“Telling me to go F’myself. I’m a F’ing loser. I’m a F’ing junkie. Who do I think I am? I think my times more important than his,” she said. “Something in my brain just clicked and shut down.”

The encounter prompted a lawsuit.

While it’s a disturbing account to be sure, it was not the first time this psychiatrist found himself at the center of controversy.

According to recently released records, White had a social and sexual relationship with a psychiatric patient in his care in 2017 while working at Cayuga Medical Center in Ithaca. That relationship that ultimately got him fired.

A complaint was also filed with the state Department of Health’s Office of Professional Medical Conduct, which launched an investigation.

As OPMC gathered its facts, White landed a job at St. Peter’s.

Disclosing the Doctor’s Past

So who knew what about White’s past? That depends on who you ask.

As part of dawn McGrath’s lawsuit, both Melissa Weimer, who was then the head of St. Peter’s Head of Behavioral Health, and White gave sworn statements about the doctor’s disclosure.

McGrath’s lawyer Greg Teresi asked, “If Dr. White had disclosed to you that he had a complaint filed against him at his previous employer, would you have had a discussion about that?”

Weimer answered, “If there were any — if he had had any complaints, we would have discussed that, yes.”

Teresi followed up with, “If an applicant had disclosed with you there was a complaint related to having inappropriate relationships with a patient, is that somebody that you would have considered for hiring?”

However, in White’s deposition, he maintained he disclosed his termination from Cayuga Medical Center.

Teresi asked the doctor, “Did St. Peter’s ever ask if you’ve ever been terminated from a job?”

Teresi: “And what was your response?”

White: “I believe I documented that I had been.”

White: “Not that I recall”.

Teresi: “It never came up in the interview with Dr. Weimer?”

Regardless of what St. Peter’s did or didn’t do to vet White, it would have been nearly impossible to find out about his prior termination and inappropriate conduct – or that his license was likely in jeopardy. That’s because disciplinary hearings by the OPMC are secret until their conclusion, which took more than two years.

It’s not a Department of Health decision. It’s a state statute, one that may need a second look.

“I think any reasonable person can understand that. It’s one thing to be accused of something. It’s another thing to be found guilty. Everyone wants to have that due process,” Assemblyman John McDonald said.

McDonald, a member of the Assembly Health Committee and a licensed pharmacist, said it’s a tough situation. False allegations against doctors are not uncommon, and a reputation could be ruined by a baseless accusation.

Still, he said a potential employer needs some leeway.

“The process, at least in this situation, from the depositions I’ve read, have put the perspective employer at a disadvantage,” he said. “We are evaluating language to see if we can make a difference in this area. This case has definitely caused enough concern that when we know we have an extreme need for providers out there, we want employers to have every tool accessible to make the right decision. I think in this situation, the employer was kind of blinded a little bit.”

After White’s license was revoked in New York in 2020, he was immediately suspended in Virginia. Shortly after his revocation here, he appealed his suspension in Virginia, but was denied.

The board of medicine cited what it called “poor medical judgement,” including excessive prescription of stimulants, inappropriate comments to substance abuse patients, as well as anger issues.

The patient that White had a sexual relationship with in Ithaca with has since died.