Thruway bridge over Schoharie Creek to be inspected again in June

The Thruway bridge over the Schoharie Creek is about to be inspected again.

NewsChannel 13 noted that the bridge is due for another inspection during our special coverage of the 35th anniversary of the bridge collapse.

The New York Thruway Authority says the bridge will be inspected in June. They own the bridge, so they are in charge of inspecting it.

The Thruway says their engineering staff, or sometimes a third-party engineering firm that’s hired to check a bridge, performs the inspections.

The last time that bridge was inspected was in June 2020. 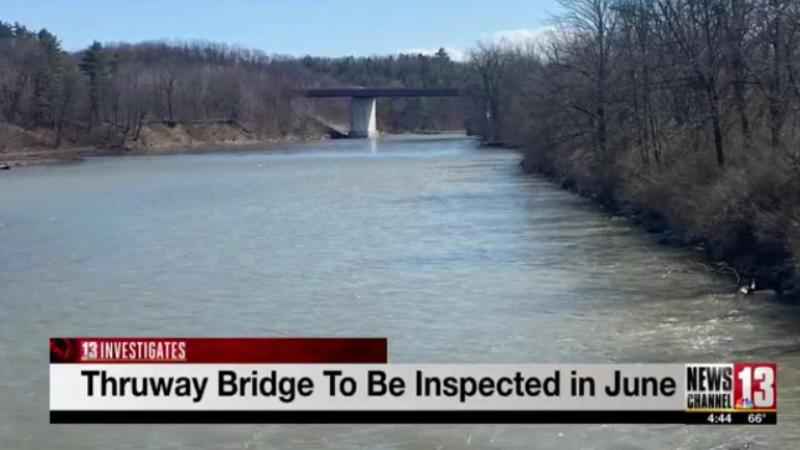 Federal regulations state bridges need to be inspected at least once every two years.

Bridge inspections are elaborate and complex.

Every element of the bridge is going to be inspected from top to bottom.

It is rated on a condition scale – on a one to four. It goes from good, fair, poor, and severe.

"Good" meaning it has checked all the boxes – there is little to no deterioration.

"Poor" means some of the primary components of a bridge, like the part of the bridge you drive on or the legs of a bridge, need fixing.

If a bridge is in poor condition, it could mean more frequent inspections, closer monitoring, or even some weight restrictions.

Each minute that a bridge is being checked needs to be reported. Other documentation of an inspection including notes, photos, and sketches should show the dates when that part of the work happened.

The Thruway says machines are sometimes used to inspect a bridge thoroughly. Those machines can go over the side of a bridge, letting engineers get a better look at what’s happening below.

The current bridge inspection manual that needs to be followed was last updated in March 2017.