It has been just over six weeks since a man wielding two swords savagely attacked Jon Romano inside an Albany homeless shelter.

Romano, 34, is now continuing his convalescence at an area nursing home after spending more than a month at Albany Medical Center.

Speaking exclusively to NewsChannel 13, Romano said physically he’s been “recovering pretty well,” but that it’s the mental part of the recovery that has been “a struggle.”

Romano says the first couple of weeks after the attack were “definitely the most difficult.”

Police say Randell Mason, 42, of Albany sliced away at Romano with a sword in either hand. Both of Romano’s hands and legs were severed, causing serious nerve and tendon damage.

“I still struggle mostly with sleep,” Romano stated. “When you try to sleep at nighttime, that’s when everything comes floating through the mind. I manage to distract myself while I’m awake.”

Romano says he’s hoping to be able to walk “pretty quickly.” He says his legs are getting pretty strong with the physical therapy he’s able to do in his bed 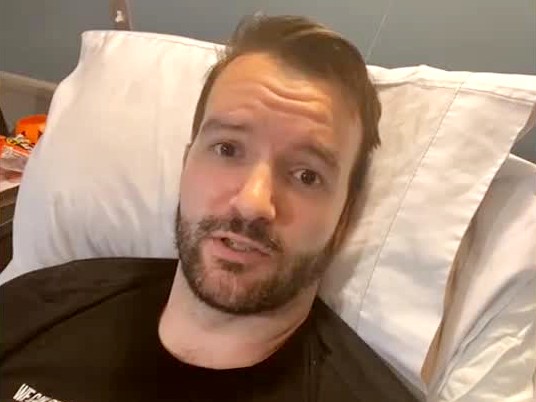 Jon Romano is recovering from his injuries from a sword attack at an Albany homeless shelter. He spoke to NewsChannel 13 on Oct. 17, 2022.

The main concern at this point is for his hands, said Romano. With medical fixation devices holding his arms together, he’s still unable to move his hands. However, he optimistically points out he can wiggle two of his fingers.

“I don’t believe that people are pure evil,” Romano asserted. “I don’t believe he’s walked around his whole life an evil person. I don’t know what has brought him to this point in his life.”

Romano reiterates that he’s not qualified to determine if Mason is mentally ill, although he has long been a proponent for more resources for individuals who are suffering from mental illness or experience homelessness.

“I believe that everybody deserves a chance at turning their life around, and I believe that we should be reforming our idea of what should happen to somebody after they’ve committed a horrible crime,” Romano stated.

Romano was able to transform his own life — from a mentally ill, suicidal teenager who once carried a loaded shotgun into Columbia High School in East Greenbush, firing at students and staff — into a redeemed contributor to society, working at a homeless shelter to help others back up on their feet.

“We have an overwhelming amount of people losing their lives to drug overdoses and suicide,” Romano pointed out. “If we talk about mental health and if we end the stigma against mental health, we can save numerous lives.”

Romano says returning to work at the shelter one day is a scary thought, given what’s happened. However, he says he enjoys the work, and he wants to continue doing it.